Well, I can’t say I expected to go months without giving everyone an update, but life is what it is. Thankfully, things seem to be settling into a more stable rhythm and the writing is progressing nicely.

Shadows, Episode 5: Torture, the finale in the Bryan McAllister and Larien Russell character arcs, will become available on April 18, 2014. The book has caused me some grief and requires a bit more post-production work than previous episodes. It is, however, longer than the preceding episodes. We’ll see whether or not it becomes the longest as I plod through making tweaks here and there.

The cover art has been finalized for some time now and is available here.

Once Torture is available, I will be producing a Volume 1 hardcover edition of Shadows, which will contain books 1 through 5. This will likely be available sometime in Q4 2014 prior to the release of the next book in the series.

The untitled novel previously mentioned in my October update is also progressing, though it is quite a bit longer than the Shadows books and consequently takes more time to produce. I suspect it will be available sometime in Q3 or Q4 2014. Once I have final release dates, I will post them here.

Comments Off on March 2014 Update

I have updated the coming soon page with my current projections. Thanks to burnout from various life events that have taken place since October, Shadows #5 is still incomplete. I hope to use some of my holidays next week to get some writing done and hope to have it ready for mid-late January. I’m aiming for the 24th of January as a release date, but I will not state that with any finality until it’s a sure thing.

The book I thought would be ready for December has taken on a life of its own and has grown beyond its original outline (that happens sometimes). It is as yet unfinished. I have a lot of goals for the New Year and will keep you all posted. My apologies to everyone waiting for the next episode of Shadows. It will be out as soon as it is ready.

Comments Off on December 2013 Update

Unfortunately, due to illness and other things beyond my control, the release of Shadows: i am anna has been delayed. It should hopefully be up electronically in the usual places within the next 2–3 days. With any luck, it might even get up towards the end of the 16th. The print releases of Shadows are also delayed until further notice, but I do hope to have them all up by mid-September. Hopefully life will accommodate my wishes.

Comments Off on Minor Delay 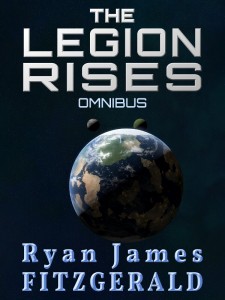 Shadows, Episode 4: i am anna, is slated for e-book release on August 16, 2013. This should coincide with the print releases of the first two episodes of Shadows, to be followed by the third and fourth by the end of August.

Shadows, Episode 5: Torture, is slated for an October e-book and print simultaneous release.

Over the next 5 days, I hope to have the new editions (updated covers, samples of further episodes, and new blurbs) of all books posted to the online retailers. Those distributed through Smashwords may take up to several weeks to update.

Comments Off on The Legion Rises: Omnibus and Release Dates

Barring no unforeseen events, Shadows, Episode 4: i am anna should arrive sometime in June along with print editions of The Legion Rises (omnibus and its e-book counterpart for those who want the three books in one set) and the first episode of Shadows. The new covers for Shadows, which can be previewed here, will debut at that time.

By the time Shadows, Episode 5: Torture arrives in August (tentatively), I hope to have all of the current episodes of Shadows in print.

Shadows of a Distant Past should hopefully be out in July.

The coming soon page has been updated with this information.

Comments Off on Upcoming Releases, Summer 2013